Your day-by-day itinerary now includes Toronto Harbour as well as CN Tower. Kick off your visit on the 3rd (Fri): admire the masterpieces at The Market Gallery, hunt for treasures at St. Lawrence Market, then enjoy breathtaking views from CN Tower, and finally take a stroll through Toronto Harbour.

For ratings, maps, where to stay, and tourist information, read our Toronto attractions website .

If you are flying in from Brazil, the closest major airports are Lester B. Pearson International Airport and Billy Bishop Toronto City Centre Airport. April in Toronto sees daily highs of 13°C and lows of 3°C at night. On the 4th (Sat), you'll have the morning to explore before heading off to Niagara Falls.
more less

Things to do in Toronto 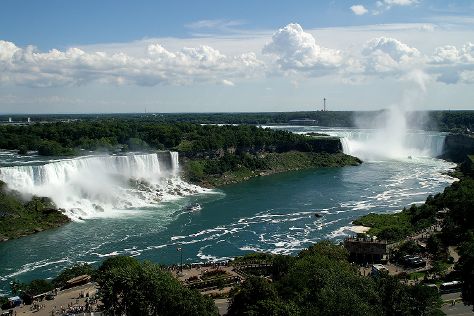 Indisputably one of the world's most impressive natural sights, Niagara Falls straddle the United States/Canada border, marking the spot at which a thundering river plunges over a major escarpment.

Your day-by-day itinerary now includes Skylon Tower as well as Niagara Falls. Kick off your visit on the 4th (Sat): take in the dramatic scenery at Niagara Falls and then take in panoramic vistas at Skylon Tower.

For ratings, where to stay, photos, and other tourist information, read our Niagara Falls tour itinerary planner .

Traveling by car from Toronto to Niagara Falls takes 1.5 hours. Alternatively, you can take a train; or take a bus. In April, daily temperatures in Niagara Falls can reach 15°C, while at night they dip to 2°C. Wrap up your sightseeing on the 4th (Sat) early enough to drive to Niagara-on-the-Lake.
more less

Things to do in Niagara Falls 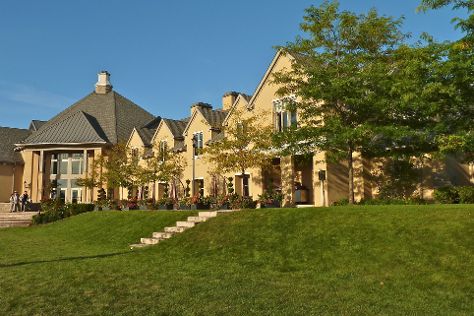 In a place calling itself the "Loveliest Town in Canada," vacations in Niagara-on-the-Lake remain a good choice for anyone searching for a relaxed and scenic experience in Canada's wine country.

For other places to visit, maps, and tourist information, go to the Niagara-on-the-Lake trip itinerary builder app .

Niagara-on-the-Lake is just a short distance from Niagara Falls. Expect a daytime high around 14°C in April, and nighttime lows around 3°C. Finish your sightseeing early on the 4th (Sat) so you can drive to Montreal.
more less

Things to do in Niagara-on-the-Lake

Wineries
Find places to stay Apr 4 — 5:
Hotels on TripAdvisor
Homes on Airbnb
Highlights from your plan

Quebec's economic and cultural capital, Montreal serves as the province's major point of entry, known for its rich history and high standard of living.

Explore hidden gems such as St. Patrick's Basilica and Espace Culturel Ashukan. Get some historical perspective at Notre-Dame Basilica and Saint Joseph's Oratory of Mount Royal. When in Montreal, make a side trip to see Chambly Canal in Chambly, approximately 36 minutes away. Next up on the itinerary: admire the masterpieces at Crystal Dreams St-Denis.

For traveler tips, maps, photos, and other tourist information, use the Montreal vacation planner.

Getting from Niagara-on-the-Lake to Montreal by car takes about 8 hours. Other options: do a combination of bus, train, and flight; or do a combination of bus and train. In April, daily temperatures in Montreal can reach 12°C, while at night they dip to 2°C. On the 8th (Wed), you'll have the morning to explore before heading off to Calgary.
more less

Things to do in Montreal

Known as the "Stampede City" thanks to its world-famous annual rodeo, Calgary remains a tale of two cities.

On the 8th (Wed), take in the architecture and atmosphere at Knox United Church.

To find ratings, where to stay, traveler tips, and other tourist information, you can read our Calgary trip builder website .

Fly from Montreal to Calgary in 7 hours. Alternatively, you can do a combination of train and flight; or drive. The time zone difference moving from Eastern Standard Time (EST) to Mountain Standard Time (MST) is minus 2 hours. Expect little chillier evenings in Calgary when traveling from Montreal in April, with lows around 0°C. Finish up your sightseeing early on the 9th (Thu) so you can go by car to Banff National Park.
more less

Things to do in Calgary

Among the world's oldest national parks, Banff National Park serves as a World Heritage-listed mecca for cyclists, hikers, skiers, bird-watchers, mountain climbers, and anyone else with a passion for exploring vast untouched wildernesses.

Icefields Parkway has been added to your itinerary. Visiting Burgess Shale and Natural Bridge will get you outdoors. Eschew the tourist crowds and head to Sentinel Pass and Crowfoot Glacier. When in Banff National Park, make a side trip to see Siffleur Falls in Rocky Mountain House, approximately 1h 05 min away. Next up on the itinerary: tour the pleasant surroundings at Ink Pots Hiking Trail and contemplate the waterfront views at Minnewanka Loop / Lake Johnson.

To see other places to visit and more tourist information, go to the Banff National Park road trip planner.

Things to do in Banff National Park

Known as "Hollywood North," Vancouver boasts one of the largest film/television industries in the world, second only to Los Angeles and New York.

Start off your visit on the 13th (Mon): contemplate in the serene atmosphere at International Buddhist Society (Buddhist Temple), then identify plant and animal life at George C. Reifel Migratory Bird Sanctuary, and then kick back and relax at Crescent Beach. Get ready for a full day of sightseeing on the next day: enjoy the sand and surf at Jericho Beach, take in nature's colorful creations at Bloedel Conservatory, and then wander the streets of Gastown.

To see ratings, reviews, traveler tips, and tourist information, you can read our Vancouver sightseeing tool .

Things to do in Vancouver

Casa Loma has been added to your itinerary. Get a sense of the local culture at Royal Ontario Museum and Bloor West Village. Step off the beaten path and head to Cambridge Butterfly Conservatory and Reid Chocolates. Change things up with these side-trips from Toronto: Whitby (Heber Down Conservation Area & Lynde Shores Conservation Area). Enjoy Toronto some more: ponder the world of politics at Ontario Legislative Building.

Traveling by flight from Vancouver to Toronto takes 7 hours. Alternatively, you can do a combination of bus and flight; or drive. The time zone difference moving from Pacific Standard Time (PST) to Eastern Standard Time (EST) is 3 hours. In April, Toronto is little chillier than Vancouver - with highs of 13°C and lows of 3°C. Cap off your sightseeing on the 19th (Sun) early enough to travel back home.
more less

Things to do in Toronto