Tromso is known for nightlife, wildlife, museums, zoos & aquariums, and nature. Your plan includes some of its best attractions: surround yourself with nature on a nature and wildlife tour, take in the dramatic natural features at Tromso Fjords, examine the collection at The Polar Museum (Polarmuseet), and get lost in a book at Tromso Public library and City Archives.

For traveler tips, other places to visit, more things to do, and more tourist information, go to the Tromso tour planner.

Bergen is known for nature, shopping, historic sites, museums, and nightlife. Your plan includes some of its best attractions: take in the waterfront at Bryggen, take in the awesome beauty at Mount Lovstaken, race across the water with a speed boat tour, and relax and rejuvenate at some of the best spas.

To find maps, reviews, other places to visit, and tourist information, read our Bergen trip planner .

You can fly from Tromso to Bergen in 4 hours. Alternatively, you can drive; or do a combination of bus and train. Traveling from Tromso in March, things will get somewhat warmer in Bergen: highs are around 6°C and lows about 0°C. Wrap up your sightseeing on the 7th (Sat) early enough to travel to Forsand Municipality.
more less

Iskanten
Find places to stay Mar 4 — 7:
Hotels on TripAdvisor
Homes on Airbnb
Highlights from your plan 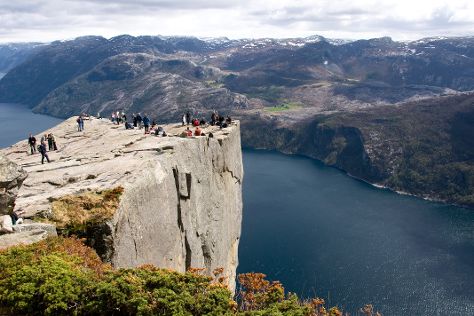 With a cluster of villages surrounded by untouched nature, Forsand Municipality is a great destination for those looking to immerse themselves in scenic surroundings, far from the city bustle.

On the 8th (Sun), take in the dramatic natural features at Gloppedalsura Scree and then take your sightseeing to a higher altitude at Kjerag. Get ready for a full day of sightseeing on the 9th (Mon): take in the pleasant sights at Solspeilet - The Norwegian Stonehenge, get great views at Pulpit Rock, and then explore the striking landscape at Hogsfjorden.

Things to do in Forsand Municipality

Step out of Oslo to go to Son and see Hallanderiet, which is approximately 48 minutes away. The adventure continues: explore the world behind art at Vigeland Museum, take an in-depth tour of Kon-Tiki Museum, get in on the family fun at Norsk Folkemuseum, and contemplate the waterfront views at Oslofjord.

To find where to stay, reviews, traveler tips, and tourist information, go to the Oslo trip itinerary website .

You can do a combination of bus and flight from Forsand Municipality to Oslo in 5 hours. Other options are to do a combination of bus, flight, and train; or take a train. Traveling from Forsand Municipality in March, Oslo is little chillier at night with lows of -4°C. Finish your sightseeing early on the 15th (Sun) so you can travel back home.
more less

Hallanderiet
Find places to stay Mar 9 — 15:
Hotels on TripAdvisor
Homes on Airbnb
Highlights from your plan