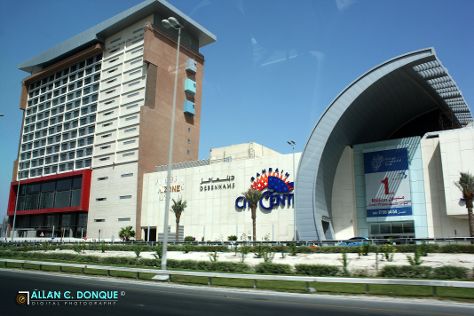 Bahrain's capital and largest city, Manama serves as a commercial and financial hub, keeping pace with other Gulf capitals dominating this part of the world.

Kick off your visit on the 10th (Mon): stop by City Centre Bahrain, take an in-depth tour of Bahrain National Museum, and then contemplate in the serene atmosphere at Al-Fatih Mosque (Great Mosque).

You can plan Manama trip in no time by asking Inspirock to help create your itinerary.

If you are flying in from Bahrain, the closest major aiport is Bahrain International Airport. In August, plan for daily highs up to 47°C, and evening lows to 38°C. Wrap up your sightseeing on the 10th (Mon) early enough to travel to New York City.
more less

Things to do in Manama

Writer Pearl Buck once called New York City “a place apart,” and this giant urban center remains unlike any other in the world.

Your cultural itinerary includes sights like 9/11 Memorial and American Museum of Natural History. Step out of the city life by going to Horse-Drawn Carriage Tours and Speed Boats Tours. When in New York City, make a side trip to see Great Neck Steppingstone Park in Great Neck, approximately Great Neck away. There's still lots to do: see the interesting displays at Ground Zero Museum Workshop, stroll around World Trade Center's Liberty Park, get to know the fascinating history of Brooklyn Heights Promenade, and explore the world behind art at Frick Collection.

For ratings, more things to do, photos, and tourist information, go to the New York City online trip itinerary builder.

Traveling by combination of flight and bus from Manama to New York City takes 17.5 hours. Alternatively, you can fly; or do a combination of flight and train. The time zone difference moving from Arabian Standard Time (AST) to Eastern Standard Time (EST) is minus 8 hours. Traveling from Manama in August, things will get much colder in New York City: highs are around 34°C and lows about 25°C. Wrap up your sightseeing on the 15th (Sat) early enough to travel to Orlando.
more less

Things to do in New York City

Theme Park Capital of the World

For most people, any mention of Orlando immediately conjures up images of sprawling theme parks filled with characters plucked right out of popular animated movies.

Take a break from the city and head to Cocoa Beach and Fishing Charters & Tours. You'll enjoy a bit of beach vacationing at Ormond Beach and Beach at Daytona Beach. Explore Orlando's surroundings by going to Stetson Mansion (in DeLand), St. Augustine (Cathedral Basilica of St. Augustine, St. Augustine Distillery, &more) and Ponce Inlet (Ponce de Leon Inlet Lighthouse & Museum & Ponce Inlet Historical Museum). There's still lots to do: discover the magic at Disney's Typhoon Lagoon Water Park, contemplate in the serene atmosphere at Basilica of the National Shrine of Mary, Queen of the Universe, explore the world behind art at Charles Hosmer Morse Museum of American Art, and have some family-friendly fun at The Escape Game Orlando.

Traveling by combination of flight and train from New York City to Orlando takes 6 hours. Alternatively, you can do a combination of bus, flight, and train; or drive. While traveling from New York City, expect somewhat warmer days and about the same nights in Orlando, ranging from highs of 39°C to lows of 28°C. Wrap up your sightseeing on the 20th (Thu) to allow time to travel to Miami.
more less

Things to do in Orlando

Florida’s mecca of fun in the sun, the lively tropical metropolis of Miami is one of the world’s top vacation spots.

Explore hidden gems such as Hollywood Beach and Art Deco Historic District. Get some cultural insight at Vizcaya Museum and Gardens and Lock & Load Museum. Change things up with these side-trips from Miami: Fort Lauderdale (Intracoastal Waterway & Las Olas Beach) and Everglades National Park (Pineland Trail & Anhinga Trail). There's much more to do: kick back and relax at Bill Baggs Cape Florida State Park, zoom along the surf with a waterskiing or jet-skiing adventure, and have fun at Lock & Load Miami.

Fly from Orlando to Miami in 3.5 hours. Alternatively, you can drive; or do a combination of flight and train. Expect a daytime high around 38°C in August, and nighttime lows around 30°C. Finish your sightseeing early on the 23rd (Sun) to allow enough time to travel back home.
more less

Things to do in Miami