Go for a jaunt from Lisbon to Sintra to see Quinta da Regaleira about 36 minutes away. And it doesn't end there: admire nature's wide array of creatures at Lisbon Oceanarium, make a trip to Praca do Comercio (Terreiro do Paco), admire the landmark architecture of Mosteiro dos Jeronimos, and explore the world behind art at Museu Nacional do Azulejo.

To find more things to do, traveler tips, reviews, and other tourist information, refer to the Lisbon trip itinerary planning website.

Get out of town with these interesting Paris side-trips: Versailles (The Trianons & The Hamlet, Palace of Versailles, &more). There's lots more to do: don't miss a visit to Eiffel Tower, admire the masterpieces at Musee d'Orsay, admire the landmark architecture of Arc de Triomphe, and browse the exhibits of Louvre Museum.

Versailles
Find places to stay Jul 4 — 7:
Hotels on TripAdvisor
Homes on Airbnb
Highlights from your plan

Vibrant and noisy, London is one of the world’s leading cities, an international capital of culture, education, fashion, music, finance, trade, and politics.

Start off your visit on the 8th (Thu): pause for some serene contemplation at St. Paul's Cathedral, thenenjoy breathtaking views from Tower Bridge, thencontemplate the long history of Buckingham Palace, and finally walk around Hyde Park. Here are some ideas for day two: get a sense of history and politics at Houses of Parliament, thentake in the spiritual surroundings of Westminster Abbey, thenenjoy breathtaking views from Coca-Cola London Eye, and finally explore the world behind art at National Gallery.

For traveler tips, maps, other places to visit, and other tourist information, go to the London trip site.

Traveling by train from Paris to London takes 3.5 hours. Alternatively, you can fly; or do a combination of car and train. Due to the time zone difference, you'll gain 1 hour traveling from Paris to London. Traveling from Paris in July, expect nights in London to be about the same, around °C, while days are a bit cooler, around °C. Wrap up your sightseeing on the 9th (Fri) early enough to travel to Amsterdam.
more less

Things to do in London

Amsterdam is known for museums, nightlife, and breweries & distilleries. Your plan includes some of its best attractions: explore the world behind art at Van Gogh Museum, take a tour by water with Boat Tours & Water Sports, contemplate the long history of Museum Het Rembrandthuis (Rembrandt House), and get engrossed in the history at Anne Frank House.

To see where to stay, photos, maps, and other tourist information, you can read our Amsterdam trip planner.

Fly from London to Amsterdam in 4 hours. Alternatively, you can take a train; or do a combination of car and train. Traveling from London to Amsterdam, you'll lose 1 hour due to the time zone difference. In July, daytime highs in Amsterdam are °C, while nighttime lows are °C. Finish your sightseeing early on the 12th (Mon) to allow enough time to travel to Rome.
more less

You can fly from Amsterdam to Rome in 6 hours. Other options are to take a train; or drive. Plan for somewhat warmer temperatures traveling from Amsterdam in July, with highs in Rome at °C and lows at °C. Finish up your sightseeing early on the 14th (Wed) so you can travel to Madrid.
more less

Start off your visit on the 15th (Thu): admire the striking features of Royal Palace of Madrid, thenmake a trip to Puerta del Sol, and then admire the masterpieces at Prado National Museum. Keep things going the next day: pause for some serene contemplation at Iglesia de San Isidro, contemplate the long history of Plaza Mayor, thensee the interesting displays at Museo Nacional Thyssen-Bornemisza, and finally explore the world behind art at Museo Nacional Centro de Arte Reina Sofia.

To see maps, traveler tips, more things to do, and tourist information, go to the Madrid trip planning website.

Fly from Rome to Madrid in 6.5 hours. Alternatively, you can take a train; or drive. In July, plan for daily highs up to °C, and evening lows to °C. Wrap up your sightseeing on the 16th (Fri) to allow time to take a train to Barcelona.
more less

To find more things to do, traveler tips, photos, and more tourist information, use the Barcelona day trip site.

Traveling by train from Madrid to Barcelona takes 3.5 hours. Alternatively, you can fly; or drive. When traveling from Madrid in July, plan for slightly colder days and about the same nights in Barcelona: temperatures range from °C by day to °C at night. Finish your sightseeing early on the 18th (Sun) so you can travel to Munich.
more less

©
Basilica of the Sagrada Familia 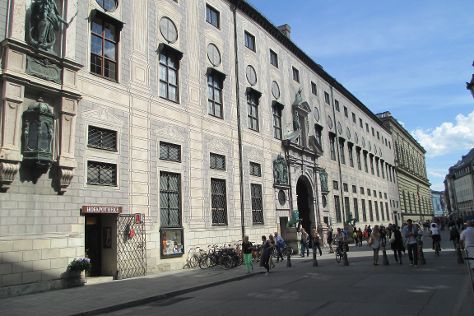 Start off your visit on the 19th (Mon): explore the activities along English Garden, thentake in panoramic vistas at Frauenkirche, thencontemplate in the serene atmosphere at St. Michael's Church, and finally examine the collection at Munich Residenz. Keep things going the next day: contemplate the long history of Nymphenburg Palace, admire the masterpieces at Alte Pinakothek, and then don't miss a visit to Marienplatz.

For photos, where to stay, more things to do, and more tourist information, read our Munich online holiday planner.

You can fly from Barcelona to Munich in 6 hours. Other options are to drive; or take a train. Prepare for a bit cooler weather when traveling from Barcelona in July: high temperatures in Munich hover around °C and lows are around °C. Cap off your sightseeing on the 20th (Tue) early enough to go by car to Zurich.
more less

The financial hub of Switzerland, Zurich is most often associated with money and banks.

Start off your visit on the 21st (Wed): appreciate the history behind Lion Monument, explore the activities along Lake Lucerne, and then explore the activities along Lake Zurich. Keep things going the next day: snap pictures at Chapel Bridge, thenadmire the striking features of Lucerne Station, thentake in the awesome beauty at Mt Pilatus, and finally look for all kinds of wild species at Pilatus Luzern.

To find photos, ratings, and other tourist information, you can read our Zurich trip maker site.

Traveling by car from Munich to Zurich takes 3.5 hours. Alternatively, you can fly; or take a train. In July, plan for daily highs up to °C, and evening lows to °C. Wrap up your sightseeing by early afternoon on the 23rd (Fri) to allow time for travel back home.
more less

Things to do in Zurich

Lucerne
Find places to stay Jul 20 — 23:
Hotels on TripAdvisor
Homes on Airbnb
Highlights from your plan