Surfing remains the main reason to take a trip to Tamarindo, as the beachside town is mostly known for its excellent waves.

Get outdoors at Playa Conchal and Tamarindo Beach. Step off the beaten path and head to Spas and Papaya Con Leche.

To see ratings, photos, traveler tips, and other tourist information, go to the Tamarindo trip site.

Toronto, Canada to Tamarindo is an approximately 9.5-hour flight. You can also drive. Traveling from Toronto to Tamarindo, you'll gain 1 hour due to the time zone difference. Finish your sightseeing early on the 6th (Mon) to allow enough time to drive to Jaco.
more less

Things to do in Tamarindo

A seaside resort town with plenty of entertaining distractions along its attractive coastline, Jaco has long been a major tourist destination on the central Pacific coast.

You'll explore the less-touristy side of things at Horseback Riding Tours and Playa Bejuco. Head to Zukia Art Gallery and Fruity Monkey Poopfor plenty of shopping. Step out of Jaco to go to Parrita and see Palo Seco Beach, which is approximately 1 hour away. There's much more to do: enjoy the sand and surf at Playa Linda, don't miss a visit to Mirador de Jaco, get to know the resident critters at Neo Fauna CR, and explore by horseback at Vista Los Suenos Horseback Riding.

For ratings, traveler tips, where to stay, and other tourist information, refer to the Jaco attractions planner.

Getting from Tamarindo to Jaco by car takes about 4.5 hours. Other options: take a bus. Finish up your sightseeing early on the 9th (Thu) so you can go by car to San Jose.
more less

Things to do in Jaco

A trip to San Jose, the capital, commercial center, and cultural hub of Costa Rica, gives you a chance to experience the lively atmosphere and rich cultural past of this vibrant country.

To see maps, more things to do, photos, and more tourist information, you can read our San Jose vacation maker.

Getting from Jaco to San Jose by car takes about 2 hours. Other options: take a bus. In January in San Jose, expect temperatures between 30°C during the day and 21°C at night. Wrap up your sightseeing on the 13th (Mon) to allow time to travel to Lima.
more less

Things to do in San Jose 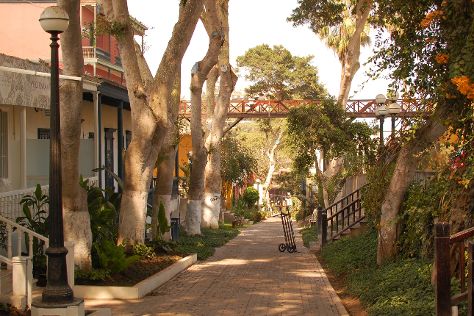 City of the Kings

Founded in 1535 by Spanish explorer Francisco Pizarro, Lima represents an interesting blend of modern attractions and preserved colonial architecture, much of it clustered in the World Heritage-listed city center.

Do some cultural sightseeing at Barranco and Church and Sanctuary of Saint Rose of Lima. Get in touch with nature at El Silencio and Nature & Wildlife Tours. Next up on the itinerary: get engrossed in the history at Museo Convento San Francisco y Catacumbas, wander the streets of Miraflores, contemplate in the serene atmosphere at Iglesia de las Nazarenas, and stop by Real Plaza Salaverry.

To find where to stay, reviews, maps, and more tourist information, refer to the Lima trip itinerary maker website.

Getting from San Jose to Lima by flight takes about 7.5 hours. The time zone difference moving from Central Standard Time to Peru Standard Time is 1 hour. In January, daily temperatures in Lima can reach 31°C, while at night they dip to 24°C. Finish your sightseeing early on the 17th (Fri) so you can travel to Cusco.
more less

Things to do in Lima

Kayaking & Canoeing and Pinkuylluna Mountain Granaries are good opportunities to explore the local culture. Give yourself a bit of retail therapy at Centro de Textiles Tradicionales del Cusco and Mercado Central de San Pedro. There's much more to do: contemplate the long history of Sacsayhuaman, trek along exploor, explore the ancient world of Q'enqo, and take in the dramatic natural features at Cerro Colorado Vinicunca.

To find reviews, photos, and other tourist information, refer to the Cusco tour itinerary planner.

You can fly from Lima to Cusco in 3.5 hours. Other options are to drive; or take a bus. Traveling from Lima in January, expect nights in Cusco to be colder, around 9°C, while days are a bit cooler, around 22°C. Wrap up your sightseeing on the 22nd (Wed) to allow time to travel to Lima.
more less

Things to do in Cusco 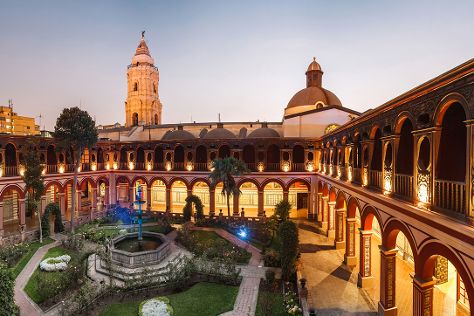 City of the Kings

Kick off your visit on the 23rd (Thu): take in the spiritual surroundings of Basilica y Monasterio de Santo Domingo, thenget a new perspective on things with Boat Tours & Water Sports, and then get a taste of the local shopping with Shopping Center Larcomar (Centro Comercial Larcomar).

To see photos, more things to do, other places to visit, and tourist information, read Lima day trip planning site.

Traveling by flight from Cusco to Lima takes 3.5 hours. Alternatively, you can drive; or take a bus. When traveling from Cusco in January, plan for a bit warmer days and warmer nights in Lima: temperatures range from 31°C by day to 24°C at night. Wrap up your sightseeing on the 23rd (Thu) early enough to travel to Buenos Aires.
more less

Things to do in Lima 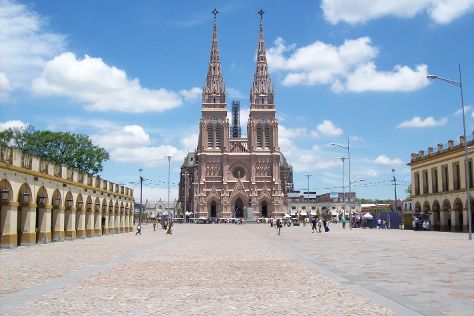 Deepen your sense of the past at sights like Basilica de Lujan and Basilica del Santisimo Sacramento. Get in touch with nature at Parque 3 de Febrero and Horseback Riding Tours. Venture out of the city with trips to Delta El Tigre (in Tigre), San Isidro (Villa Ocampo & Catedral de San Isidro) and Berisso (Palo Blanco, Playa La Balandra, &more). There's still lots to do: take a stroll through Puerto Madero, contemplate the long history of Palacio Barolo, pause for some serene contemplation at Parroquia Nuestra Senora de Lujan, and have fun and explore at Museo de La Plata.

For more things to do, photos, ratings, and tourist information, refer to the Buenos Aires trip itinerary maker tool.

You can fly from Lima to Buenos Aires in 8 hours. Alternatively, you can drive; or take a bus. Due to the time zone difference, you'll lose 2 hours traveling from Lima to Buenos Aires. Expect a daytime high around 33°C in January, and nighttime lows around 24°C. Finish your sightseeing early on the 30th (Thu) to allow enough time to travel to Rio de Janeiro.
more less 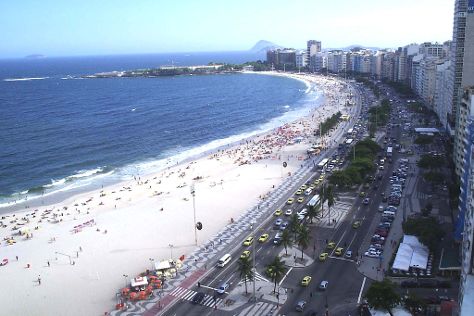 Bustling with samba music and all-night street parties, no city encapsulates the spirit of Brazil better than Rio de Janeiro.

Shop till you drop at BarraShopping and Centro Cultural Municipal Parque das Ruinas. Parque Lage and Paroquia Sao Francisco Xavier will appeal to history buffs. Explore Rio de Janeiro's surroundings by going to Camboinhas Beach (in Niteroi) and Pedra do Elefante (in Marica). The adventure continues: fly like a bird with a parasailing or paragliding tour, enjoy the sand and surf at Praia de Grumari, take some stellar pictures from Sugarloaf Mountain, and stroll through Recreio dos Bandeirantes Beach.

Before you visit Rio de Janeiro, use our trip planner to discover what you can do and see there.

Things to do in Rio de Janeiro

Don't let the city's nickname--"Land of Drizzle"--dampen your spirits during a trip to Sao Paulo.

To see where to stay, traveler tips, photos, and tourist information, refer to the Sao Paulo online travel planner.

Traveling by flight from Rio de Janeiro to Sao Paulo takes 3 hours. Alternatively, you can drive; or take a bus. Traveling from Rio de Janeiro in February, things will get a bit cooler in Sao Paulo: highs are around 34°C and lows about 23°C. Finish your sightseeing early on the 11th (Tue) so you can travel back home.
more less

Things to do in Sao Paulo