Il Castello di Udine and Chiesa di San Zaccaria will appeal to history buffs. Get a sense of the local culture at Church of San Pantalon and Santuario della Madonna di Monte Berico. Venture out of the city with trips to Villa Valmarana ai Nani (in Vicenza), Borgo rurale di Clauiano (in Clauiano) and Battistero del Duomo (in Padua). There's lots more to do: get advice or help at Museo Querini Stampalia, admire the landmark architecture of Palazzo Fortuny (Pesaro degli Orfei), take in the architecture and atmosphere at Saint Mary of The Rosary, and explore the historical opulence of Ca' d'Oro.

For ratings, other places to visit, maps, and tourist information, you can read our Venice travel app.

Montreal, Canada to Venice is an approximately 12-hour flight. The time zone difference moving from Eastern Standard Time to Central European Standard Time is 6 hours. Expect somewhat warmer weather when traveling from Montreal in July: highs in Venice hover around °C, while lows dip to °C. Cap off your sightseeing on the 4th (Sat) early enough to go by car to Bologna.
more less 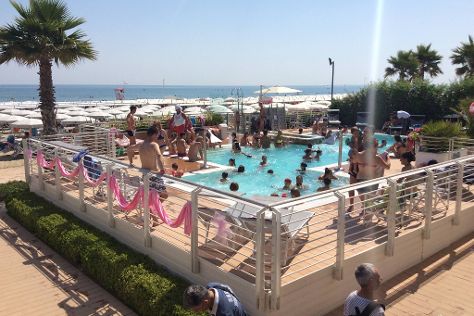 Satisfy your inner culture vulture at Cimitero monumentale della Certosa and Complesso Monumentale San Michele In Bosco. You'll enjoy a bit of beach vacationing at Playa del Sol and Oscar Spiaggia 298. Explore Bologna's surroundings by going to Bagno 169 (in Cervia) and Riccione (La Spiaggia Del Cuore 110 & Lido delle Sirene 101 - 102). Next up on the itinerary: take in the spiritual surroundings of Basilica di San Domenico, take an in-depth tour of La Macchina del Tempo, pick up some new knowledge with Academya Lingue, and admire the landmark architecture of Portico del Pavaglione.

Getting from Venice to Bologna by car takes about 2 hours. Other options: take a train; or take a bus. In July, plan for daily highs up to °C, and evening lows to °C. Finish your sightseeing early on the 8th (Wed) to allow enough time to take a train to Genoa.
more less 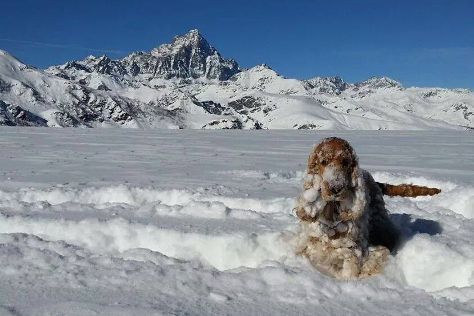 Relax by the water at Pluto Beach and Bagni Gallo. Take a break from the city and head to Bagni Liliana and River Beach. Step out of Genoa with an excursion to Basilica DI Santa Maria Assunta in Camogli--about 42 minutes away. The adventure continues: see the interesting displays at Palazzo Doria Tursi, take in the spiritual surroundings of Chiesa di San Filippo Neri, steep yourself in history at Abbazia di San Siro di Struppa, and admire the masterpieces at Musei di Nervi - Galleria d'Arte Moderna GAM.

To see where to stay, reviews, photos, and other tourist information, go to the Genoa journey maker app.

Traveling by train from Bologna to Genoa takes 3 hours. Alternatively, you can drive; or take a bus. When traveling from Bologna in July, plan for a bit cooler days in Genoa, with highs around °C, while nights are about the same with lows around °C. Cap off your sightseeing on the 11th (Sat) early enough to go by car to Assisi.
more less

For other places to visit, maps, ratings, and tourist information, you can read our Assisi trip planning website.

Drive from Genoa to Assisi in 4.5 hours. Alternatively, you can take a train; or do a combination of flight and train. Traveling from Genoa in July, you will find days in Assisi are somewhat warmer (°C), and nights are slightly colder (°C). Finish up your sightseeing early on the 16th (Thu) so you can go by car to Orvieto.
more less 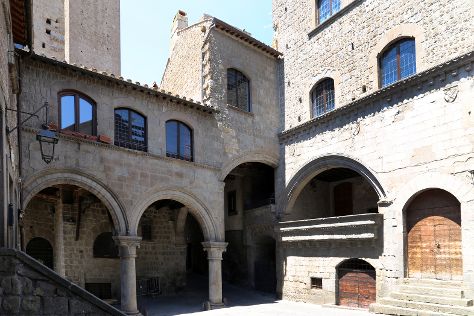 The striking town of Orvieto, perched on a volcanic cliff overlooking the Umbrian countryside, is known as the Green Heart of Italy.

Your inner history buff will appreciate Quartiere San Pellegrino and Cappella del Corporale. Explore hidden gems such as Basilica di Santa Maria Maggiore and Rocca dei Papi. You'll find plenty of places to visit near Orvieto: Archeological Museum and Tomb of Hell's Quadriga (in Sarteano), Chiesa di Santa Maria Assunta (in San Quirico d'Orcia) and Winery Solaria Patrizia Cencioni (in Montalcino). Next up on the itinerary: learn about winemaking at Gattavecchi Winery, Head underground at Via Cava, pause for some serene contemplation at Cattedrale di Santa Margherita, and look for gifts at Il Negozietto.

To find photos, where to stay, and other tourist information, refer to the Orvieto trip planning tool.

Drive from Assisi to Orvieto in 1.5 hours. Alternatively, you can take a train; or take a bus. Expect a daytime high around °C in July, and nighttime lows around °C. Finish your sightseeing early on the 21st (Tue) so you can drive to Naples.
more less

Things to do in Orvieto 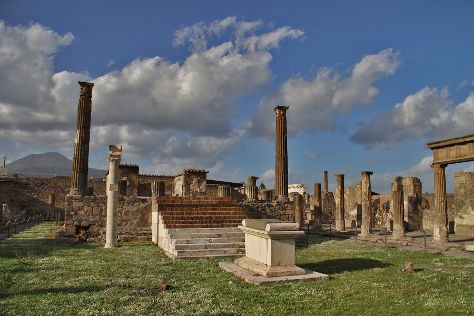 To see more things to do, reviews, where to stay, and more tourist information, read our Naples trip planning tool.

Traveling by car from Orvieto to Naples takes 3.5 hours. Alternatively, you can take a train; or take a bus. In July, daily temperatures in Naples can reach °C, while at night they dip to °C. Finish your sightseeing early on the 28th (Tue) to allow enough time to travel to Alghero.
more less

Built surrounding a 16th-century fortified port, Alghero remains one of Sardinia's most visited sites, rich in cultural and historical heritage.

Visit I Gatti di Su Pallosu and spiaggia di Porto Ferro for some beach relaxation. Discover out-of-the-way places like Porto Ferro and Spiaggia di Balai. Venture out of the city with trips to Sassari (Castrum Romano La Crucca & Cattedrale di San Nicola), Sa Mesa Longa (in San Vero Milis) and Basilica San Gavino (in Porto Torres). And it doesn't end there: contemplate in the serene atmosphere at Chiesa di San Giovanni in Sinis, enjoy the sand and surf at Maimoni Beach, steep yourself in history at Altare Monte d'Accoddi, and tour the pleasant surroundings at Lido San Giovanni.

To see more things to do, photos, ratings, and more tourist information, go to the Alghero day trip tool.

Things to do in Alghero 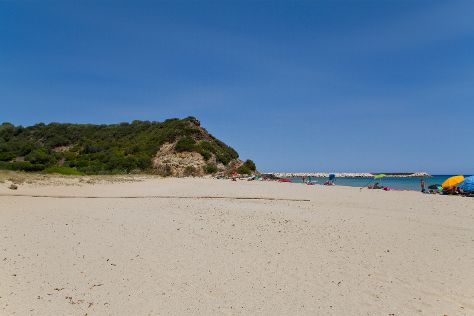 For where to stay, more things to do, maps, and more tourist information, read our San Teodoro journey builder.

You can drive from Alghero to San Teodoro in 2.5 hours. Other options are to do a combination of train and bus; or take a bus. Expect a daytime high around °C in August, and nighttime lows around °C. Finish your sightseeing early on the 8th (Sat) so you can travel to San Vito lo Capo.
more less

A vacation in San Vito lo Capo offers a chance to enjoy a sheltered bay and a town with distinctive Arab-Norman architecture.

To find other places to visit, maps, reviews, and other tourist information, refer to the San Vito lo Capo vacation planner.

Traveling by flight from San Teodoro to San Vito lo Capo takes 5.5 hours. Alternatively, you can do a combination of bus and ferry; or do a combination of bus, train, and ferry. Traveling from San Teodoro in August, expect somewhat warmer with lows of °C in San Vito lo Capo. Finish your sightseeing early on the 14th (Fri) so you can drive to Taormina.
more less

Things to do in San Vito lo Capo 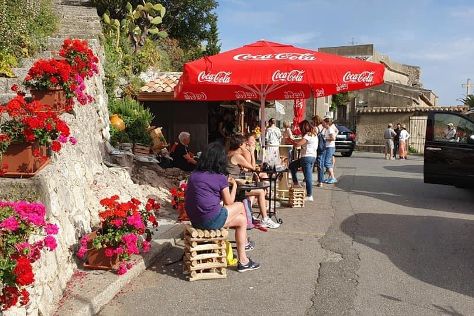 With its warm island weather and cliffside location overlooking the Ionion Sea, Taormina has been one of Sicily's most popular getaway destinations since the early 19th century.

Before you visit Taormina, use our trip planner to discover what you can do and see there.

Getting from San Vito lo Capo to Taormina by car takes about 4.5 hours. Other options: do a combination of car and train; or do a combination of bus and train. Expect a daytime high around °C in August, and nighttime lows around °C. Wrap up your sightseeing on the 21st (Fri) to allow time to travel back home.
more less

Things to do in Taormina