You'll explore the less-touristy side of things at Castelo dos Mouros and Museu Nacional do Azulejo. Satisfy your inner culture vulture at Belém Tower and Castelo de S. Jorge. Get out of town with these interesting Lisbon side-trips: Cabo da Roca (in Colares) and Sintra (Museu de Historia Natural, Sintra National Palace, &more). Spend the 7th (Tue) wandering through the wild on a nature and wildlife tour. Next up on the itinerary: take in the spiritual surroundings of Mosteiro dos Jeronimos, admire the masterpieces at Museu Calouste Gulbenkian, examine the collection at National Museum of Ancient Art, and visit Bairro Alto.

Mumbai, India to Lisbon is an approximately 15- hour flight. You can also do a combination of flight and train; or do a combination of bus, train, and flight. You'll gain 5.5 hours traveling from Mumbai to Lisbon due to the time zone difference. Traveling from Mumbai in May, you will find days in Lisbon are a bit cooler (28°C), and nights are colder (15°C). Wrap up your sightseeing on the 8th (Wed) to allow time to drive to Albufeira.
more less

Sintra, Cabo da Roca
Find places to stay May 2 — 8:
Hotels on TripAdvisor
Homes on Airbnb
Highlights from your plan

Along Portugal's southern Algarve region sits Albufeira, a city boasting 20 beaches for visitors to choose from.

Get some historical perspective at Cape Saint Vincent and Old Town Faro. Get some cultural insight at Faro Cathedral and Cerro da Vila. Change things up with these side-trips from Albufeira: Lagos (Praia Dona Ana, Ponta da Piedade, &more), Praia Da Rocha (in Praia da Rocha) and Vau Beach (in Portimao). And it doesn't end there: kick back and relax at Praia da Luz, stroll through Falesia Beach, and look for all kinds of wild species at Lagoa dos Salgados.

Traveling by car from Lisbon to Albufeira takes 2.5 hours. Alternatively, you can take a bus; or take a train. In May, daytime highs in Albufeira are 28°C, while nighttime lows are 18°C. On the 14th (Tue), wrap the sightseeing up by early afternoon so you can drive to Evora.
more less

Things to do in Albufeira

The city of Evora functions as a museum of Roman origins and medieval times.

To see reviews, photos, more things to do, and other tourist information, use the Evora trip itinerary planner.

You can drive from Albufeira to Evora in 3 hours. Alternatively, you can take a train; or do a combination of flight and train. Traveling from Albufeira in May, plan for little chillier nights in Evora, with lows around 13°C. Finish your sightseeing early on the 20th (Mon) to allow enough time to drive to Tomar.
more less

Things to do in Evora

©
Tomar, also known in English as Thomar, is a city and a municipality in Santarém District in Portugal. Discover out-of-the-way places like Basilica de Nossa Senhora do Rosario de Fatima and Castelo de Tomar. Step out of the city life by going to Praia da Nazare and NaturZ. Venture out of the city with trips to Batalha (Centro de Interpretação da Batalha de Aljubarrota, Capelas Imperfeitas, &more), Casa dos Patudos – Museu de Alpiarca (in Alpiarca) and Monastery of Alcobaca (in Alcobaca). And it doesn't end there: take in the architecture and atmosphere at Basilica da Santissima Trindade, examine the collection at Casa-Estudio Carlos Relvas, explore the world behind art at Museu de Aguarela de Alfredo Roque Gameiro, and explore the historical opulence of Castelo de Torres Novas.

Drive from Evora to Tomar in 2.5 hours. Alternatively, you can take a train; or take a bus. When traveling from Evora in May, plan for slightly colder days and about the same nights in Tomar: temperatures range from 24°C by day to 13°C at night. Wrap up your sightseeing on the 25th (Sat) to allow time to travel to Viseu.
more less

Things to do in Tomar

©
Viseu is a city and municipality in the Centro Region of Portugal and the capital of the district of the same name, with a population of 99,274 inhabitants, and center of the Viseu Dão Lafões intermunipical community, with 267,633 inhabitants.Settled during the period of the early Iberian castro culture, the territory of Viseu was populated by a series of cultures, that include the Romans, Suebs, Visigoths and Moors. Get in touch with nature at Penha Garcia and Poco da Cesta - praia fluvial de Casal Novo. Eschew the tourist crowds and head to Museu Nacional de Machado de Castro and Museu Monografico de Conimbriga. Explore Viseu's surroundings by going to Museu PO.RO.S (in Condeixa-a-Nova), Monsanto (in Beiras) and Praia Fluvial de Folgosa (in Castro Daire). There's lots more to do: stroll through Ribeira de Meimoa River Beach, take in the architecture and atmosphere at Church of the Third of San Francisco, see the interesting displays at Museu Terras de Besteiros, and kick back and relax at Praia da Vagueira.

You can drive from Tomar to Viseu in 2 hours. Finish your sightseeing early on the 1st (Sat) to allow enough time to travel to Braganca.
more less

Things to do in Viseu

©
Bragança is a city and municipality in north-eastern Portugal, capital of the district of Bragança, in the Alto Trás-os-Montes subregion of Portugal. Appreciate the collections at Museu Do Abade De Bacal and Centro de Arte Contemporanea Graca Morais. Get a sense of the local culture at Castle of Braganza and Domus Municipalis. Get out of town with these interesting Braganca side-trips: Chaves (Praca de Camoes & Church of Misericordia), Santuario de Nossa Senhora da Assuncao (in Vila Flor) and Museu das Curiosidades (in Mirandela). There's lots more to do: pause for some serene contemplation at Church of Santa Maria, steep yourself in history at Rock Engravings of Mazouco, take some stellar pictures from Miradouro de Penedo Durao, and examine the collection at Museu Iberico da Mascara e do Traje.

To see maps, reviews, where to stay, and more tourist information, you can read our Braganca holiday planner.

Drive from Viseu to Braganca in 2 hours. Cap off your sightseeing on the 5th (Wed) early enough to travel to Guimaraes.
more less

Things to do in Braganca

Birthplace of the Portuguese Nationality

The historical town of Guimarães was the birthplace of the first Portuguese king and served as the country's first capital.

Drive from Braganca to Guimaraes in 2.5 hours. June in Guimaraes sees daily highs of 26°C and lows of 16°C at night. Cap off your sightseeing on the 11th (Tue) early enough to travel to Angra do Heroismo.
more less

Things to do in Guimaraes

©
Angra do Heroísmo, generally known as Angra, is a municipality and city on the island of Terceira in the Portuguese autonomous region of the Azores. Monte Brasil and Palacio dos Capitaes Generais are good opportunities to explore the local culture. Visit Imperio do Espirito Santo de Sao Sebastiao and Igreja Da Misericordia for their historical value. The adventure continues: look for all kinds of wild species at Wildlife Areas, get to know the fascinating history of Rua da Se, Head underground at Algar do Carvão - Monumento Natural Regional, and make a trip to Observatorio do Ambiente dos Acores (OAA).

To find reviews, more things to do, where to stay, and more tourist information, read our Angra do Heroismo trip planner.

Things to do in Angra do Heroismo 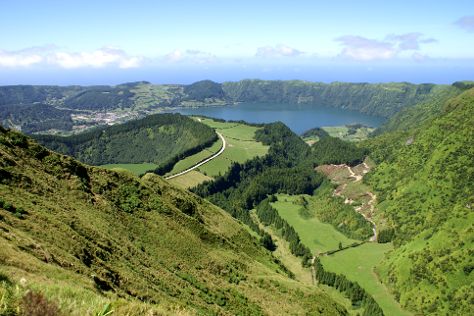 As the busy capital of São Miguel, Ponta Delgada represents the most visited place on the island. Known for its historical buildings, the city offers 17th- and 18th-century convents and churches, as well as cobbled pedestrian streets and hidden squares.

Get outdoors at Caldeira das Sete Cidades and Poca Da Dona Beija. Get some cultural insight at Priolo Environmental Center and Oficina - Museu. Explore Ponta Delgada's surroundings by going to Furnas (Parque Terra Nostra, Caldeiras Vulcânicas, &more) and Mosteiros Beach (in Mosteiros). Next up on the itinerary: contemplate the waterfront views at Lagoa do Fogo, hike along Rocha da Relva, cast your line with a fishing tour, and get impressive views of Lagoa das Furnas.

To find where to stay, photos, ratings, and other tourist information, refer to the Ponta Delgada online trip itinerary planner.

Traveling by combination of bus and flight from Angra do Heroismo to Ponta Delgada takes 4 hours. Alternatively, you can ride a ferry. In June in Ponta Delgada, expect temperatures between 24°C during the day and 19°C at night. Finish up your sightseeing early on the 23rd (Sun) so you can travel to Funchal.
more less

Things to do in Ponta Delgada 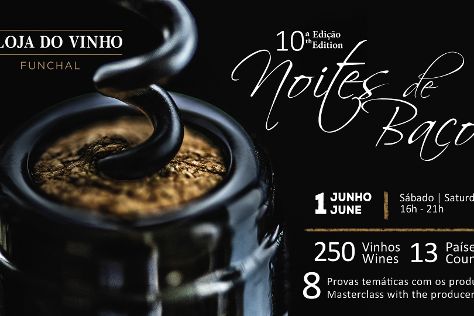 The capital of the island of Madeira for more than 500 years, Funchal represents a laid-back city made popular by its historical sites and climate.

Let the collections at Frederico de Freitas Museum and Ethnographic Museum capture your imagination. Eschew the tourist crowds and head to Porto Moniz Natural Swimming Pools and Blandy's Wine Lodge. Venture out of the city with trips to Ponta de Sao Lourenco (in Machico), Ponta do Pargo (Ponta do Pargo Lighthouse & Church of Sao Pedro) and Levada Ribeira de Janela (in Porto Moniz). There's lots more to do: see majestic marine mammals with a dolphin and whale watching tour, engage your brain at Museu da Baleia da Madeira, contemplate in the serene atmosphere at Igreja do Colegio Sao Joao Evangelista, and examine the collection at Madeira Film Experience.

To see ratings, where to stay, other places to visit, and more tourist information, refer to the Funchal trip website.

Things to do in Funchal