Deepen your sense of the past at sights like Bom Jesus do Monte and Largo da Oliveira. Your cultural itinerary includes sights like Centro Historico de Guimaraes and Santuario de Santa Luzia. Get out of town with these interesting Porto side-trips: Fortaleza de Valenca (in Valenca), Ponte Romana (in Ponte de Lima) and Braga (Sameiro Sanctuary, Se de Braga, &more). There's much more to do: take in the spiritual surroundings of Santuario Nossa Senhora dos Remedios, take in the architecture and atmosphere at Se Catedral de Viseu, admire the landmark architecture of Paco dos Duques de Braganca, and relax and rejuvenate at some of the best spas.

For maps and other tourist information, go to the Porto travel route planner.

Reykjavik, Iceland to Porto is an approximately 10-hour flight. In January, Porto is a bit warmer than Reykjavik - with highs of °C and lows of °C. Finish your sightseeing early on the 8th (Sat) to allow enough time to drive to Vila Nova de Gaia.
more less

To find other places to visit, reviews, ratings, and more tourist information, you can read our Vila Nova de Gaia trip itinerary tool.

Vila Nova de Gaia is just a short distance from Porto. Expect a daytime high around °C in January, and nighttime lows around °C. Wrap up your sightseeing on the 10th (Mon) to allow time to drive to Geres.
more less

Things to do in Vila Nova de Gaia

To see maps, ratings, more things to do, and more tourist information, go to the Geres trip itinerary planning tool.

Traveling by car from Vila Nova de Gaia to Geres takes 1.5 hours. Finish up your sightseeing early on the 12th (Wed) so you can travel to Coimbra.
more less

Things to do in Geres

Granaries of Lindoso
Find places to stay Jan 10 — 12:
Hotels on TripAdvisor
Homes on Airbnb
Highlights from your plan

The university town of Coimbra exudes modern flair while embracing its roots as the medieval capital of Portugal.

To find photos, more things to do, reviews, and tourist information, use the Coimbra trip planner.

You can drive from Geres to Coimbra in 2.5 hours. In January in Coimbra, expect temperatures between °C during the day and °C at night. Cap off your sightseeing on the 19th (Wed) early enough to go by car to Sintra.
more less

Things to do in Coimbra

Surrounded by rolling hills and old mansions and castles, Sintra has become known as the first center of the European Romantic style.

You'll enjoy a bit of beach vacationing at Praia Foz do Arelho and Baleal Beach. Explore hidden gems such as Castelo dos Mouros and Palacio Nacional de Mafra. When in Sintra, make a side trip to see Obidos Village in Obidos, approximately Obidos away. Next up on the itinerary: contemplate the long history of Sintra National Palace.

For where to stay, traveler tips, photos, and more tourist information, use the Sintra travel route planner.

You can drive from Coimbra to Sintra in 2.5 hours. Other options are to take a train; or take a bus. In January in Sintra, expect temperatures between °C during the day and °C at night. Finish your sightseeing early on the 22nd (Sat) to allow enough time to drive to Cascais.
more less

Things to do in Sintra 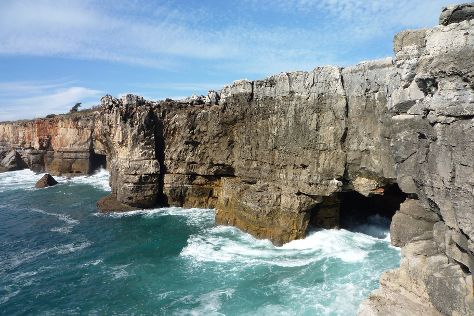 Town of Kings and Fishes

A mere 32 km (20 mi) from Lisbon, the coastal town of Cascais has a long history of entertaining royals.

Cascais is just a stone's throw from Sintra. January in Cascais sees daily highs of °C and lows of °C at night. Finish your sightseeing early on the 24th (Mon) to allow enough time to drive to Lisbon.
more less

Things to do in Cascais 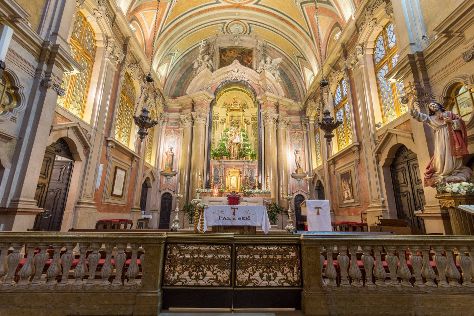 You'll explore the less-touristy side of things at Parque das Nacoes and Igreja de Sao Domingos (Santa Justa e Rufina). Do some cultural sightseeing at Santo Antonio de Lisboa and Igreja de Sao Roque. Change things up with these side-trips from Lisbon: Castelo de Óbidos (in Obidos), Palacio de Valflores (in Santa Iria de Azoia) and Museu do Hospital e das Caldas (in Caldas da Rainha). Dedicate the 1st (Tue) to wine at some of the top wineries in the area. And it doesn't end there: explore the historical opulence of Palácio Nacional da Ajuda, get engrossed in the history at Carmo Archaeological Museum, indulge in some personalized pampering at some of the best spas, and steep yourself in history at Panteao Nacional.

Getting from Cascais to Lisbon by car takes about an hour. Other options: take a train. January in Lisbon sees daily highs of °C and lows of °C at night. Wrap up your sightseeing on the 1st (Tue) early enough to drive to Almada.
more less

©
Almada is a city and a municipality in Portugal, located on the southern margin of the Tagus River, on the opposite side of the river from Lisbon. On the 2nd (Wed), pause for some photo ops at Santuario Nacional de Cristo Rei, thenexamine the collection at National Coach Museum, and then visit a coastal fixture at Belem Lighthouse.

For more things to do, other places to visit, where to stay, and tourist information, use the Almada holiday builder app.

Almada is very close to Lisbon. Expect a daytime high around °C in February, and nighttime lows around °C. Finish your sightseeing early on the 2nd (Wed) to allow enough time to drive to Setubal.
more less

Things to do in Almada

Belem
Find places to stay Feb 1 — 2:
Hotels on TripAdvisor
Homes on Airbnb
Highlights from your plan 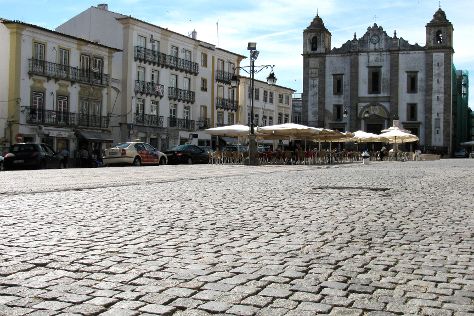 ©
Setúbal is a city and a municipality in Portugal. Get some historical perspective at Capela dos Ossos and Cathedral of Evora (Se Catedral de Evora). Get in touch with nature at Parque Natural da Arrabida and Cabo Espichel. Explore the numerous day-trip ideas around Setubal: Museu Regional do Vinho (in Redondo), Monsaraz (Monsaraz Castle and Walls & Hermitage of Santa Catarina) and Evora (Sao Joao Evangelista Church (Evora), Templo Romano de Evora (Templo de Diana), &more). And it doesn't end there: admire the striking features of Paco Ducal, explore the world behind art at Casa de Bocage., and get to know the fascinating history of Estacoes da Via Sacra de Vila Vicosa.

To find more things to do, reviews, ratings, and tourist information, go to the Setubal vacation builder website.

You can drive from Almada to Setubal in an hour. Other options are to take a bus; or take a train. In February in Setubal, expect temperatures between °C during the day and °C at night. Finish up your sightseeing early on the 8th (Tue) so you can go by car to Portimao.
more less

Things to do in Setubal 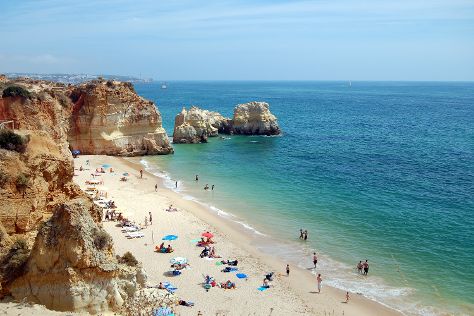 Originally a small fishing village, Portimão today serves as one of the most populated towns in the Algarve and also a favorite spot for sailing.

Castelo de Silves and Edificio Pacos do Concelho are good opportunities to explore the local culture. We've included these beaches for you: Praia Da Rocha and Odeceixe Beach. You'll find plenty of places to visit near Portimao: Ilha Deserta (in Faro) and Ilha da Culatra (in Olhao). The adventure continues: enjoy the sand and surf at Praia da Marinha, do a tasting at Quinta dos Vales Wine Estate, take in the waterfront at Alvor Boardwalk, and tour the pleasant surroundings at Joao de Arens Beach.

To find where to stay, maps, more things to do, and tourist information, use the Portimao trip maker app.

You can drive from Setubal to Portimao in 2.5 hours. Alternatively, you can take a train; or fly. In February, daytime highs in Portimao are °C, while nighttime lows are °C. Finish up your sightseeing early on the 15th (Tue) so you can go by car to Lagos.
more less

Things to do in Portimao

Get in touch with nature at Praia do Beliche and Arrifana Beach. Satisfy your inner culture vulture at Lagos Farol da Ponta da Piedade and Cape Saint Vincent. Change things up with these side-trips from Lagos: Menir do Padrao (in Vila do Bispo), Aljezur (Castelo de Aljezur & Vale Figueiras Beach) and Sagres (Fort of Santo Antonio de Belixe, Igreja de Nossa Senhora da Graca, &more). Next up on the itinerary: kick back and relax at Praia da Luz, stroll through Meia Praia, contemplate the long history of Antigo Mercado de Escravos, and take in the dramatic natural features at Ponta da Piedade.

To plan Lagos vacation without wasting time, ask Inspirock to design an itinerary.

Traveling by car from Portimao to Lagos takes an hour. Alternatively, you can take a train; or take a bus. In February, daily temperatures in Lagos can reach °C, while at night they dip to °C. Finish your sightseeing early on the 22nd (Tue) so you can drive to Albufeira.
more less 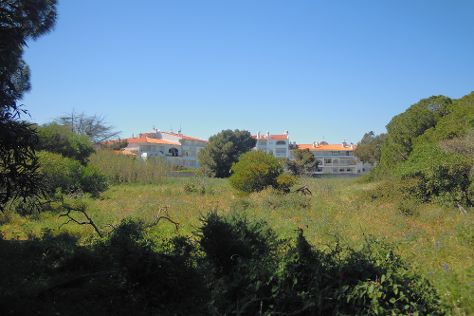 Along Portugal's southern Algarve region sits Albufeira, a city boasting 20 beaches for visitors to choose from.

Step off the beaten path and head to Praia da Oura and Old Town Faro. You'll get in some beach time at Praia dos Salgados and Praia Gale. Explore Albufeira's surroundings by going to Praia do Barril (in Tavira), Church of Nossa Senhora da Assuncao (in Alte) and Faro (Capela dos Ossos, Faro Cathedral, &more). The adventure continues: stroll through Falesia Beach, get outside with Outdoor Activities, admire the striking features of Sao Bartolomeu de Messines Church, and take in the exciting artwork at Galeria de Arte Pintor Samora Barros.

For where to stay, ratings, and tourist information, go to the Albufeira trip planner.

Traveling by car from Lagos to Albufeira takes an hour. Alternatively, you can take a bus; or take a train. February in Albufeira sees daily highs of °C and lows of °C at night. On the 1st (Tue), wrap the sightseeing up by early afternoon so you can travel back home.
more less

Things to do in Albufeira